Phanny’s Burgers in Redondo Beach is the best breakfast burrito spot in my area. Recently, they began serving Stumptown coffee, as well as other interesting concoctions such as the drink above.

This morning I went in to try one. While waiting on my order, I googled root beer lattes, and I discovered that it appears they’re fairly new, yet trendy.

Then, I got my order, took a sip, and it’s actually really good! And I don’t even like root beer!

I would’ve loved to sit there a chat about what inspired them to create this, but it was a busy Saturday morning with far too many people for me to butt in just to ask about my latte. Maybe next time.

It tastes like it also has condensed milk in it, which very nicely, weirdly complements the root beer and coffee. It’s so strange and so good. It tastes like a refreshingly sweet latte with a hint of root beer.

I’m repeating myself. I’m not sure how else to describe it, so I’ll just leave it at this: It’s good. If you’re in the area, go try one. If you’re not in the area, ask your local coffee place to consider trying it out?

I’m now realizing that not every coffee place has root beer soda sitting around, which makes this an even more perfect drink for a place like Phanny’s that serves breakfast burritos, fries, burgers and Stumptown coffee — oh, and it’s only blocks away from the beach.

I went to Pepperdine and lived in Santa Monica. In order to get to school you have to take PCH, which is the worst highway in America. There is always traffic and there is no way around it. I’d pick up Mexican food before class, and I’d end up eating it in my car most of the time. Usually I’d just rest the burrito in the front armrest compartment thing. Obviously, I’ve been doing it all wrong. This is the greatest thing ever.

it never hurts to keep a secret burrito hidden in ur car in case there's a long red light pic.twitter.com/pO4ZsVW3Gx

I wouldn’t call myself a foodie. I’m just a normal person who likes food and who loves to try new things. I had raw shrimp brains, raw chicken and sea urchin sushi in Japan. I used to be the kid who refused all vegetables, but somehow I wound up growing up to be a person who will eat just about anything at least once.

I’ve eaten some pretty cool things since I’ve gotten to NYC about a month ago, so I thought I’d take a sec to share, in no particular order: 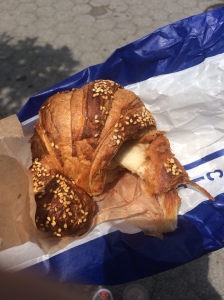 I did not wander here on my own accord. I interned at Grantland, and it turns out one of the editor’s uncles started this joint. The pretzel croissant was highly recommended to me, so of course I checked it out. One word: heavenly. Cronuts, ramen burgers, [insert other ridiculous food mashup here] — got nothing on this. It’s flaky and salty on the outside, and full of warm, doughy goodness on the inside. Imagine the flakiest, most gorgeous croissant married the softest, perfectly salted pretzel. It’s so soft it barely pulls apart, then it melts in your mouth. 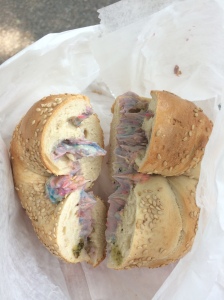 NYC doesn’t know how to make burritos. However, I will say that all of NYC does bagels better than any West Coast place. On Sunday morning (err, I guess afternoon, technically), I was looking for a place to grab breakfast. I had gone to Bob’s Bagels (or Bagel Bob’s? – no clue) the weekend before, and I wanted to try somewhere new. I perused Yelp and saw “birthday cake cream cheese” — sold. This place was poppin’ when I walked in. I knew I had come to the right spot. The bagel sandwich menu is enormous. I stuck with the birthday cake cream cheese on a sesame bagel. It was sweet and everything I expected and wanted. Although, I felt like I was on a sugar high the rest of the day. Anyway, they also have a french toast bagel that I will definitely be going back to try. Stay posted.

Now, let’s get into desserts. Mark doesn’t look spectacular from the outside. I passed it a few times before actually going inside. There’s a sign outside that boasts “best sliders in New York City” — they aren’t kidding. The sliders are dope, the fries are crisp, the atmosphere is chill, the servers are always nice. Tonight I decided to ball out and go for the Guinness Shake. I’m a fan of the dark beer. The shake is exactly what it sounds like. It’s heavy. It was good, but it’s something you should share. I was only able to finish half of it. The sweetness of the ice cream doesn’t mask the prominence of the beer. It’s all there, which is amazing and a lot to digest at the same time. 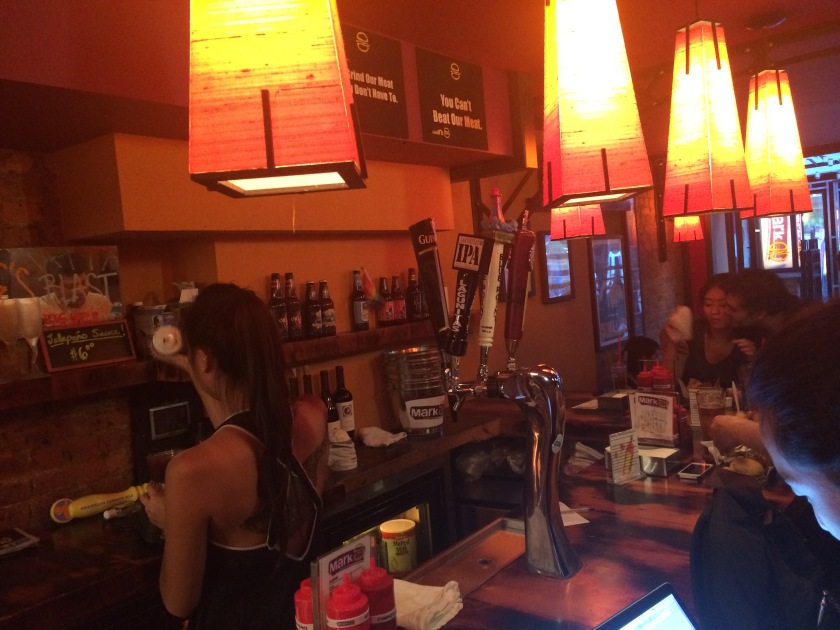 Mark also has beers on tap, and yes it gets crowded on the weekends.

This is the soft serve ice cream flavor you’ve been craving all along — you just don’t know it yet. Corn flake & milk infused ice cream. Pause and think about that, 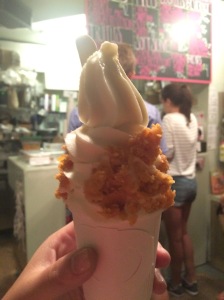 because that is exactly what it tastes like. It’s a thick, icy soft serve, and you can also add “crunch,” which is crunchy corn flakes with some added salt. It gives it that sweet and salty combo that causes a party in your mouth. They also have other amazing looking treats such as crack pies (“toasted oat crust, gooey butter cake meets chess pie”) and compost cookies (“packed with pretzels, potato chips, coffee, oats, butterscotch and chocolate chips”), to name a couple. I tried a piece of the compost cookie that basically has every ingredient you’d ever want in a cookie inside it. It was dope. I’d recommend you save it for later or for your next visit. The soft serve doesn’t look intimidating in size, but it will fill you up and leave you extremely satisfied. And they have cereal milk soft serve in a milkshake form, if you’re into that. Don’t be daunted by the long line. It moves fast, and it is oh so worth it.

While I wouldn’t call myself a foodie, I do love food, so if you have any NYC recommendations, please send them my way. I’ve also had lovely BBQ brisket, delicious $1.50 dumplings, the freshest Artichoke pizza and the best falafel I’ve had since going to Israel, courtesy of friends’ recommendations. I’ll try anything.

One thing I should have added as a fifth dope eat, but sadly forgot to take a photo of, is the peanut butter and bacon burger I devoured this weekend. It was from Whitmans. I also had the blue cheese fries which were divine, and I don’t even like blue cheese. NYC, I love you, even if you don’t have good burritos or In-N-Out.

I’m an Angeleno who has had In-N-Out all my life and Shake Shack only once. It’s true this review/comparison may not be 100 percent accurate and only like 99 percent biased, but here goes:

The first thing I noticed when I arrived at the Madison Square Park Shake Shack was the line — SO LONG. Why. How. In-N-Out can be packed, but the line rarely ever gets too long. The service is quick no matter what time of day it is. At 6 p.m. on a Friday I spent at least half an hour trying to pick up food from Shake Shack. 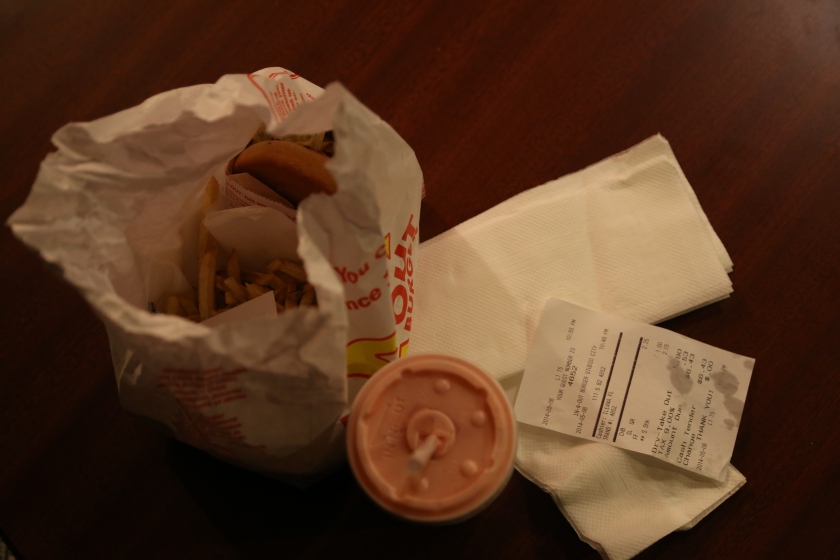 Shake Shack’s menu is definitely more diverse than In-N-Out’s. I expected that. Their shake flavor selection is pretty bomb. I had the black and white, which I thought was a cool way to rep the East Coast. Additionally, while I was waiting in line there was this really funny staff guy passing out menus and challenging customers to rock, paper, scissors — good laughs to pass the time.
In-N-Out: 1, Shake Shack: 1
The sauce is where it gets interesting. Both have their own special blend. In-N-Out has the thousand island-type stuff, while Shake Shack has a sort of spicy mayo. Both are equally good. Truly. Try ’em before you knock ’em. 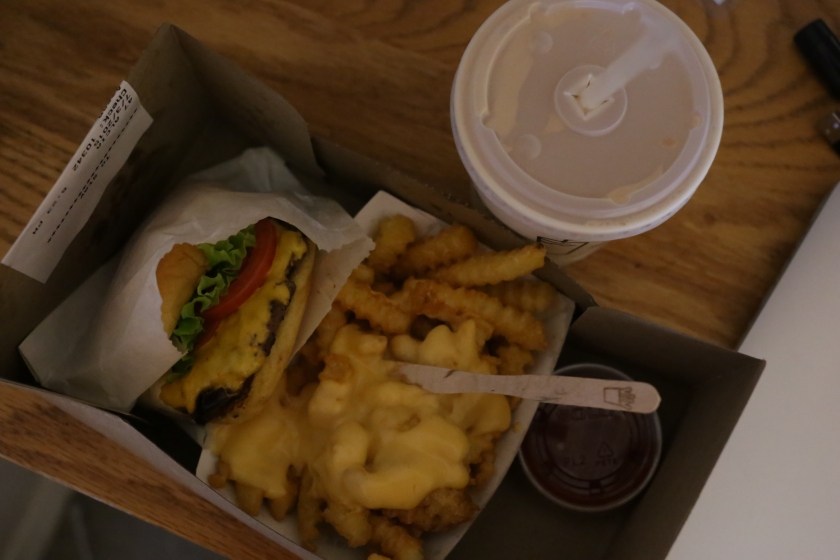 In-N-Out: 2, Shake Shack: 2
Burgers and fries are what we’re here for. I give a one-up to In-N-Out for having onions included. Yep, it’s that simple. Plus, In-N-Out uses more of their sauce, I think. Or maybe Shake Shack skimped.
In-N-Out: 3, Shake Shack: 2
Lastly, the price. You cannot beat In-N-Out’s price. The burger, fries, shake combo is definitely cheaper than that same combo at Shake Shack.
In-N-Out: 4, Shake Shack 2

Such a cute little burger.

I could also score the branding. While In-N-Out has a classic, unmistakable logo, the Shake Shack little icon things are super cute. It’s very 21st Century. The fact that Shake Shack isn’t afraid of evolving with chicken sandwiches and limited-time items could earn them two points to tie out this score. But I won’t do that because LA TILL I DIE.
In-N-Out wins, duh.
Widgets